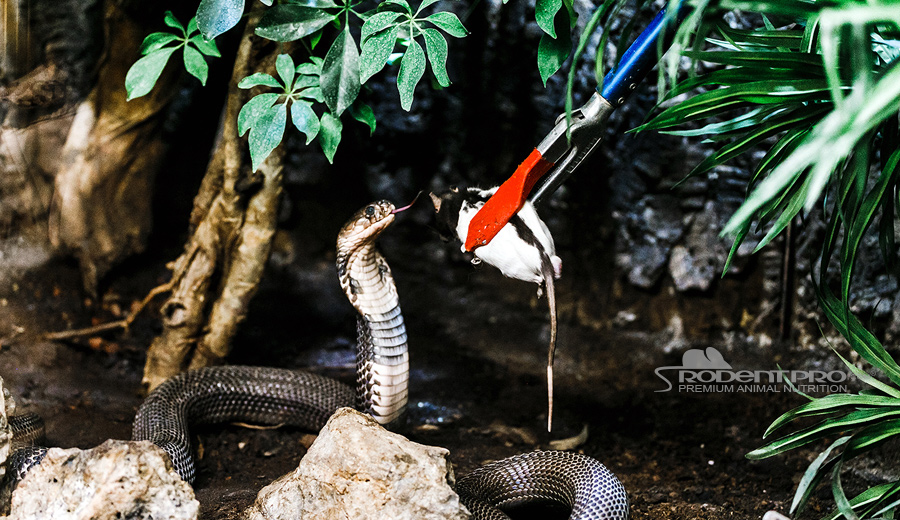 It would be difficult today to find an experienced keeper of captive reptiles who would fail to recognize that there is seldom a requirement for the feeding of live prey. Invariably most captive reptiles readily accept and thrive upon a diet consisting entirely of frozen/thawed food items. This fact has long been known in zoos and other professional animal keeping institutions and it is unfortunate that one can still find people who should know better recommending the feeding of live prey despite the many disadvantages it entails and the corresponding benefits of a diet consisting of frozen/thawed items.

Snakes and many other reptiles are what are known as obligate carnivores, being limited in their diet to consuming other animals. In the wild, this normally means that they are predators, hunting and subduing their own prey although it is not uncommon for them to scavenge when the opportunity presents itself. Many snakes and lizards have been observed feeding upon carrion and this behavior is probably even more widespread than known. They have evolved a variety of means of subduing prey ranging from those who simply seize and swallow their food alive or overcome it by biting or mauling to those utilizing some form of constriction and finally the venomous snakes with their highly developed systems of fangs and venom.

Although equipped to deal successfully with the task of obtaining their meals from the wild it is a mistake to equate this ability with the need to feed upon live prey in captivity. Most captive reptiles are willing to accept frozen/thawed food under captive conditions and this practice is beneficial for a variety of reasons.

First and foremost as an argument for the feeding of frozen/thawed food is the danger posed to the captive animal by the live prey animal. Live prey, such as rodents are quite willing to defend themselves against predation. It is not unusual to find wild specimens of reptiles that exhibit evidence of defensive wounds suffered during attempts to overcome prey. Some of the scars and wounds left behind are truly impressive and it must be considered that these are only the individuals which have survived the experience. Defensive wounds to captive animals inflicted by intended live prey are frequently seen by veterinarians and often require expensive and prolonged care. It should also be noted that should the intended meal not be devoured immediately and left in the reptile’s enclosure the specimen may well suffer an attack from the uneaten meal. Reptiles seldom seem willing or able to defend themselves from these attacks and horrific injuries or death is often the result.

It is also true that many captive reptiles are reluctant to feed upon live prey items. In a confined space the sudden movements of the potential meal may so startle or alarm the captive that it loses the desire to feed. This is frequently observed in snakes which are often reluctant to feed unless they are relaxed and do not feel threatened or defensive. Generally speaking, it is much more likely that your specimen will be willing to accept food if they are unexcited by other stimuli. Frozen/thawed food is often attractive to an animal that otherwise may be discouraged from eating by the activity of a live prey item.

Yet another point to consider is the pain and fear suffered by live prey animals. Although it is certainly true that the maintenance of reptiles in captivity requires that they are fed appropriate meals it is also the case that there is a responsibility that the food animals involved be spared unnecessary pain and suffering which is often not the case when a reptile makes its own kill. By offering frozen/thawed food items that were humanely euthanized we can avoid exposing the feeder animal to unnecessary pain and suffering.

The storage of food supplies also presents a situation that greatly favors the use of frozen/thawed items. Live feeder rodents require a large amount of space and expense for their maintenance. In addition, they need a large investment in time for their proper care. Failure to provide these resources is both inhumane and will result in serious environmental and health issues such as odors and increased risks of disease. In contrast, frozen thawed food items can be easily stored in a freezer and removed as needed. The odor and disease issues are reduced to insignificant levels with proper care and a large supply of food can be maintained with minimum effort.

It is not uncommon to experience difficulty locating exact sizes and quantities of frozen prey items at a local pet store. In the alternative, these items can be easily obtained by ordering from our website www.rodentpro.com and can be ordered in bulk quantity at substantial cost savings. Frozen reptile food can be kept for in the freezer and taken out for feeding as needed. As long as it is kept frozen and well packaged so as to avoid exposure to air it will remain fresh for a prolonged period of time.

Snakes and lizards that normally consume live prey usually exhibit no reluctance to feed upon frozen/thawed food. Sometimes it may be necessary to utilize feeding tongs or tweezers to gently move the item about to attract the animal’s attention to the food but most specimens will quickly learn to locate their food by scent alone. As a side note, never offer food with your bare hands as feeding response strikes are frequently off target enough to seize the hand instead of the food. Using a feeding tool to place the food item at the entrance of the reptiles hide box will frequently encourage a feeding response as an animal that is in its hide usually feels more secure. If you have two or more animals sharing the same enclosure it is always a good idea to separate them prior to feeding to prevent accidents such as two animals seizing the same food item.

In summary, the feeding of frozen/thawed food items is highly recommended for captive reptiles. By doing so, you avoid many potentially serious problems and inconveniences and have gone a long way toward ensuring that your animal enjoys a lengthy and trouble free life.